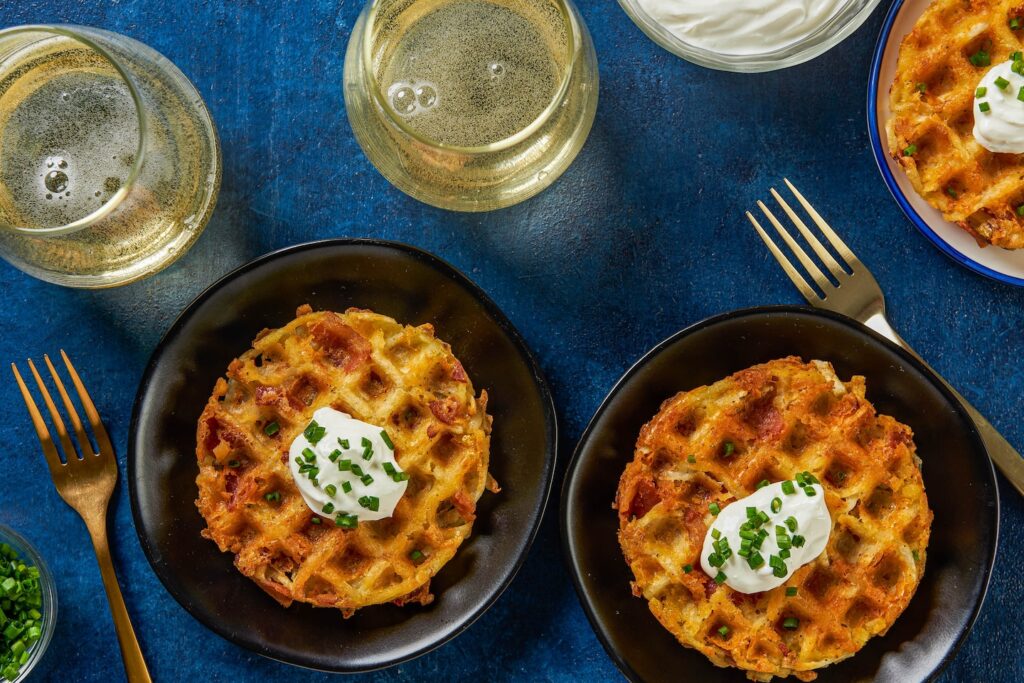 I expected bigger-than-life recipes from NBA Hall of Famer Shaquille O’Neal’s cookbook “Shaq’s Family Style” — and I got them. As I leafed through the book, I could feel myself being pulled along by the slow-cooker mac and cheese, the buttermilk fried chicken thighs and the Louisiana shrimp linguine.

This is not a cookbook for those watching their waistlines, although O’Neal does include a “healthyish” section.

When I got to the chapter devoted to breakfast for dinner — something I love — I found the Loaded Potato Waffles and screeched to a halt.

A loaded baked potato is one of my favorite treats — so much so that I shared a Loaded Baked Potato Soup in Dinner in Minutes a couple of years ago. I knew I would try these waffles, especially after I read that O’Neal thinks the dish “might be one of my greatest contributions to the world.”

What’s not to like: shredded potato, bacon, cheddar cheese and scallions crisped in a waffle iron. You can gild that lily with a dollop of sour cream as well.

The full title of the cookbook notes that the recipes are for “feeding family and friends,” so the portions are generally large. His original recipe noted that the batter makes 16 waffles, using his “Rapid Waffle Maker & Skillet.” We found it made about 10 in a standard Belgian waffle iron.

This easy buttermilk waffle recipe is fast, flexible and fun

You might think that’s too much, but it turns out a big batch of this batter is great news because the uncooked mixture freezes really well.

We ate the crisp waffles freshly made, then we froze the batter into one- and two-waffle portions and ate them for breakfast with houseguests, split one as a side dish with broiled chicken and salad, and enjoyed them again a couple of weeks later on a lazy Sunday morning with our coffee and a bowl of fresh fruit.

The batter is easy to throw together because O’Neal recommends using frozen hash browns, defrosted, of course. To save time, put your bacon in the oven and, while it cooks, shred the cheese (which we trimmed to three cups from his four), slice the scallions and gather the other ingredients.

Then it is just a matter of scooping and waffling.

Each waffle takes between five and seven minutes to make, depending on your maker and how crisp you want your waffle to be. We have a Belgian-style, double-sided one, so we can make two waffles at once, which is a great timesaver. (You’ll note the time on this recipe is longer than most Dinner in Minutes recipes. It shows how long it would take to make the batter and then cook 10 waffles at a time.)

If you spread the mixture to the edge of the waffle iron, it makes a prettier waffle, but for crisp, spidery edges of potato — think latkes here — use less filling.

If you’ve got guests coming for the holidays, this recipe might be just the thing. You can mix the batter a day or two in advance, refrigerate, and then allow folks to scoop and make waffles as they rise and shine.

I plan to make another batch, freeze portions and have the waffles on Christmas morning. They would be great as a late-night snack on New Year’s Eve with a glass of bubbly, too.

To save time, slip your bacon in the oven or skillet and, while it cooks, shred the cheese, slice the scallions and combine the other ingredients. Forgot to defrost your hash browns? Transfer them to a microwave-safe bowl and defrost in the microwave while the bacon cooks.

The number of waffles this recipe will make will depend on your waffle iron.

Make Ahead: Refrigerate uncooked batter in an airtight container up to 2 days in advance, or freeze it for up to 2 months. If frozen, defrost overnight in the refrigerator and prepare as directed.

Storage: Refrigerate slightly cooled waffles in a covered container for up to 2 days. Reheat in a 350-degree oven for about 8 minutes, or until crispy and hot.

Want to save this recipe? Click the bookmark icon at the top of this page, then go to Saved Stories in My Post.

Scale this recipe and get a printer-friendly, desktop version here.

Position a rack in the middle of the oven and preheat to 425 degrees. Place a towel-lined platter near your workspace.

Arrange the bacon strips in a single layer on a large, rimmed baking sheet and transfer to the oven (no need to wait for it to be preheated). Roast the bacon for 18 to 20 minutes, or until it is crisped. Transfer to the prepared plater, let cool for about 2 minutes and then coarsely chop.

While the bacon cooks, preheat a waffle maker to medium-high heat. (If making more than a couple of waffles at a time, once the bacon is cooked, reduce the oven temperature to 200 degrees so you can keep the waffles warm as you prepare them.)

For a Belgian waffle maker, add about 1 1/2 cups of the batter (you may need less, depending on your waffle maker) and cook according to the manufacturer’s instructions for about 5 minutes, or until golden and crisp.

Transfer the waffle to a plate or place on a baking sheet in the warm oven. Repeat with the remaining batter.

Serve waffles with a dollop of sour cream and sprinkle with sliced scallions or chives, if desired.

This analysis is an estimate based on available ingredients and this preparation. It should not substitute for a dietitian’s or nutritionist’s advice.

Scale this recipe and get a printer-friendly, desktop version here.

Browse our Recipe Finder for more than 10,000 Post-tested recipes.

Did you make this recipe? Take a photo and tag us on Instagram with #eatvoraciously.