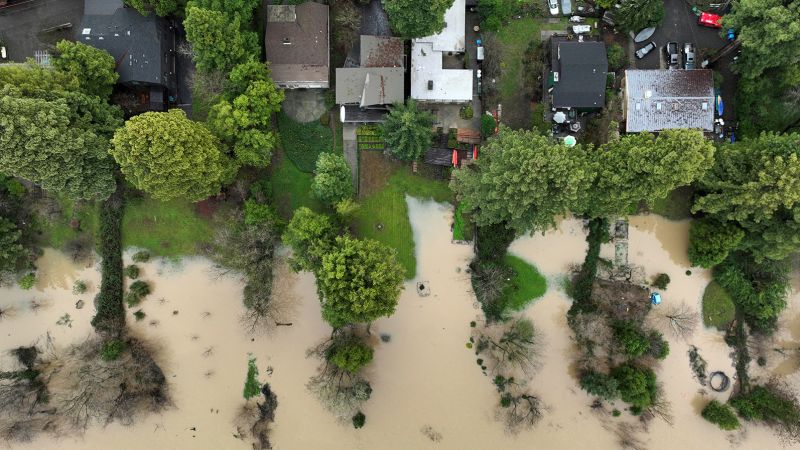 Another atmospheric river has arrived in storm-battered California, bringing renewed flooding fears, possible landslides and treacherous travel to the state Monday where a relentless string of storms has already delivered widespread damage and left at least 19 dead in recent weeks.

“We have lost too much – too many people to these storms and in these waters,” Gov. Gavin Newsom said in a statement Saturday, urging residents to prepare for another round of rain.

The latest storm is set to bring heavy mountain snow and periods of heavy rain, with an additional 1 to 3 inches of rainfall expected in areas already too saturated to absorb more water.

Meanwhile, winter storm warnings are posted for the Sierra Nevada where up to 3 feet of new snow could fall through Monday.

Residents of Ventura County’s remote Matilija Canyon were being urged Sunday to leave their homes after more than 17 inches of high-intensity rainfall resulted in significant damage and left towering piles of rock and mud over 40-feet tall blocking some roadways, isolating residents, the Ventura County Sheriff’s Office said, adding that more than ten helicopter flights have carried more than 70 residents from the area.

To the north in San Joaquin County, around 175 residents were voluntarily evacuated from a mobile home park Sunday, including by boat, after flood waters inundated the community, according to the San Joaquin County Sheriff’s Office.

The parade of atmospheric rivers – long, narrow regions in the atmosphere that can carry moisture thousands of miles – turned California communities into lakes, crippled highways and prompted thousands of evacuations.

The good news? A much-needed stretch of dry weather is on the way.

“As we push into the day on Tuesday we’re looking for quieter weather across much of the state with one fast moving additional system arriving for later Wednesday into early Thursday. After that, looking for a period of dry weather for much of the state finally as we head into late week, and pretty much through the weekend,” a National Weather Service spokesman said.

But for now, the state is bracing for more flooding, mudslides and rescues. Swift water resources and firefighters have been positioned statewide in preparation for Monday, which could see this round’s heaviest rainfall, state officials said.

Wind gusts reached hurricane-force Sunday across the higher elevations of Southern California, where around 14 million people were under wind advisories into Monday.

And as the latest storm approached, President Joe Biden on Saturday approved California’s request for a disaster declaration, freeing up federal aid to supplement recovery efforts in areas of the state affected by storms, flooding and mudslides since December 27.

The federal assistance can include grants for temporary housing and home repairs, loans to help cover property losses for uninsured homes, according to the White House.

Some isolated higher rain rates of 0.5 inches per hour could lead to a couple instances of flooding, especially given the very wet conditions as atmospheric rivers hammered the state in previous weeks.

Though this weekend’s rainfall totals will be lower than in previous storms, the threshold for flooding is much lower now because the ground is too saturated and conditions are ripe for mudslides and landslides.

There have been 402 landslides recorded statewide since December 30, according to the California Geological Survey.

Rainfall totals in recent weeks have been immense. Already, San Francisco has recorded one of its top 15 wettest winters on record. The Bay Area could see another 1-2 inches by Monday afternoon and the wettest peaks can see up to 3 inches.

To the south, the Los Angeles area saw several locations set daily rainfall records with 1 to 2 inches received Saturday. Southern California may still see isolated areas where heavy rainfall could reach up to a half an inch per hour in the heaviest storms.

Some areas of Santa Cruz County have seen more than 34 inches of rain since December 26, according to county recovery official. If this is to be confirmed by the weather service, it would land Santa Cruz in the top five wettest winters on record – with still a month left to the season.

“We’re getting flooding in our coastal streams, creeks, and rivers,” Santa Cruz County official David Reid said. “And we’re getting extensive landslides and mudslides and road failures in our mountainous areas.”

“There’s definitely a fatigue that happens with the continued storms – folks begin to fear that what we’re telling them isn’t true, but we have real concerns,” Reid added.

The need for residents to follow evacuation orders and adhere to roadway closures is real. Crews around the state have for weeks responded to rescues on flooded streets and inundated neighborhoods.

Storm-related deaths in recent weeks have included a woman whose body was found inside a vehicle that washed into a flooded vineyard, two people who were found with trees on top of their tents, a child who was killed when a redwood tree fell on a home, and several other fatalities.

And in San Luis Obispo County, rescuers are still searching for 5-year-old Kyle Doan, who was pulled from his mother’s hands by rushing floodwater on Monday after their SUV was swept away.

Rains on Saturday hampered the search as water levels rose in the San Marcos Creek and Salinas River, but crews were back out searching for the boy on Sunday as conditions improved, the San Luis Obispo County Sheriff’s Office said.

As lower elevations deal with heavy rainfall, and potential floods and mudslides, those living on higher elevations can expect heavy snowfall and dangerous conditions on the road.

Up to 3 feet of new snow could fall through Monday in Sierra Nevada while mountains in Southern California could see several inches of snow by early Tuesday morning.

Flagstaff, Arizona, saw 14.8 inches on Sunday, shattering a previous record of 8.9 inches set back in 1978.

There’s heavy outbound South Lake Tahoe traffic on WB US 50 from about Country Club Drive through the Meyers roundabout and over Echo Summit. Traffic starts to lighten up just before Twin Bridges. There’s still chain controls but no traffic incidents reported along the corridor. pic.twitter.com/HjSwOTwcXu

“Heavy mountain snow and strong winds will lead to blowing snow and whiteout conditions at times, creating dangerous to near impossible travel above 4,000 ft in the mountains and passes of Central California and above 5,000 ft for Southern California,” the National Weather Service said.

Snow could hammer the mountains at a rate of 2 inches per hour at times into Monday morning in the Sierra Nevada, the weather service added.

For Tuesday, the rain and snow will move into the Four Corners Region, but isolated showers and snow showers could still impact parts of Southern California Tuesday morning.