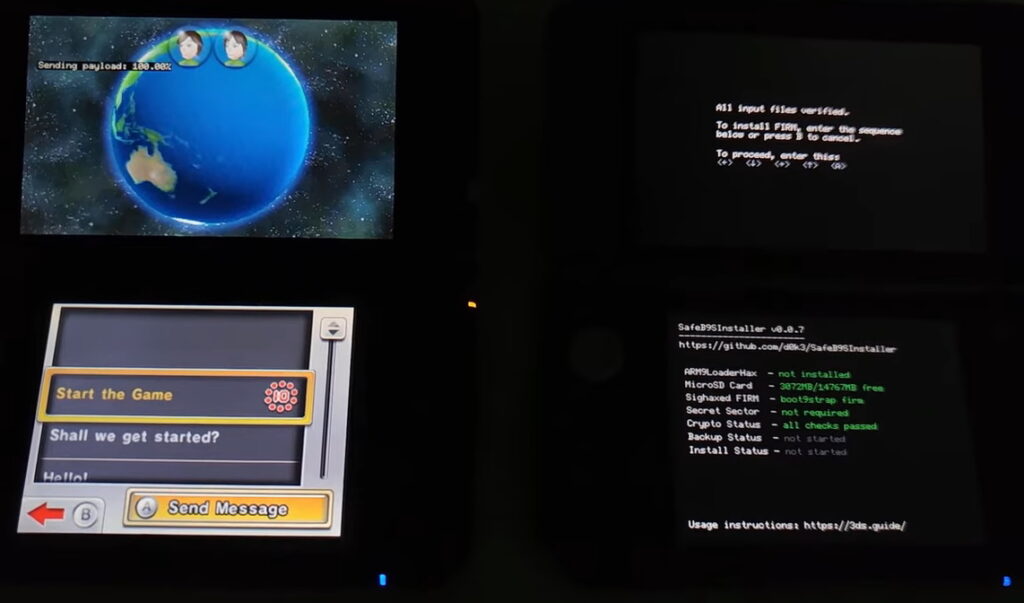 
Nintendo hacker PabloMK7 has released ENLBufferPwn, an exploit including proof of concept code, which demonstrates a critical vulnerability in multiple Nintendo first party games. Demo videos of the exploit show that it is possible to take full control of a target’s console, simply by having them join a multiplayer game.

Impacted games include Mario Kart 7, Mario Kart 8, Splatoon 1, 2, 3, Nintendo Switch Sports, and other Nintendo first party titles. The hacker explains that the vulnerability can be used as part of an exploit chain to run custom code on the consoles. However Nintendo have patched the vulnerability in most games already, following disclosure through their bounty program late last year.

What is ENLBufferPwn for Nintendo Switch, Wii U, and 3DS?

ENLBufferPwn is a vulnerability in the common network code of several first party Nintendo games since the Nintendo 3DS that allows an attacker to execute code remotely in the victim’s console by just having an online game with them (remote code execution). It was dicovered by multiple people independently during 2021 and reported to Nintendo during 2021 and 2022. Since the initial report, Nintendo has patched the vulnerability in many vulnerable games. The information in this repository has been safely disclosed after getting permission from Nintendo.

Here is a list of games that are known to have had the vulnerability at some point (all the Switch and 3DS games listed have received updates that patch the vulnerability, so they are no longer affected):

Combined with other OS vulnerabilities, full remote console takeover can be achieved. This has been demonstrated in the case of Mario Kart 7, where a payload is sent to launch SafeB9SInstaller. However, it is theoretically possible to do other malicious activities, such as stealing account/credit card information or taking unauthorized audio/video recordings using the console built-in mic/cameras.

The hacker provided proof of concept videos to showcase the vulnerability, in Mario Kart 7 and Mario Kart 8

The ENLBufferPwn vulnerability exploits a buffer overflow in the C++ class NetworkBuffer present in the network library enl (Net in Mario Kart 7) used by many first party Nintendo games. This class contains two methods Add and Set which fill a network buffer with data coming from other players. However, none of those methods check that the input data actually fits in the network buffer. Since the input data is controllable, a buffer overflow can be triggered on a remote console by just having an online game session with the attacker. If done properly, the victim user may not even notice a vulnerability was triggered in their console. The consequences of this buffer overflow vary on the game, from simple inoffensive modifications to the game’s memory (like repeatedly opening and closing the home menu on the 3DS) to more severe actions like taking full control of the console The exploit can be used to disrupt other players in online games, such as remotely pressing the home button on their controller mid-game

Can I hack my Nintendo Switch with ENLBufferPwn?

Setting the 3DS and Wii U aside for a minute, I do not think this exploit can easily be leveraged to hack the Nintendo Switch: In other words, although the vulnerability is critical, and could impact other games, I do not see personally how this could be used for a “beneficial” exploit on the Nintendo Switch. The best (and only) way to hack your Switch as 2022 comes to an end, remains modchips for newer revisions of the hardware.

As far as the 3DS and the Wii U are concerned, those can be hacked fairly easily, so the benefits of the hack are limited in that context, from an end user perspective.

Nonetheless, it’s a pretty remarkable achievement to come up with an exploit that can target multiple console generations at once!

You can download the ENLBufferPwn code for Mario Kart 7 and Mario Kart 8 on the project’s github here.

How Our Brains Switch Into Smarter Sickness Fighters