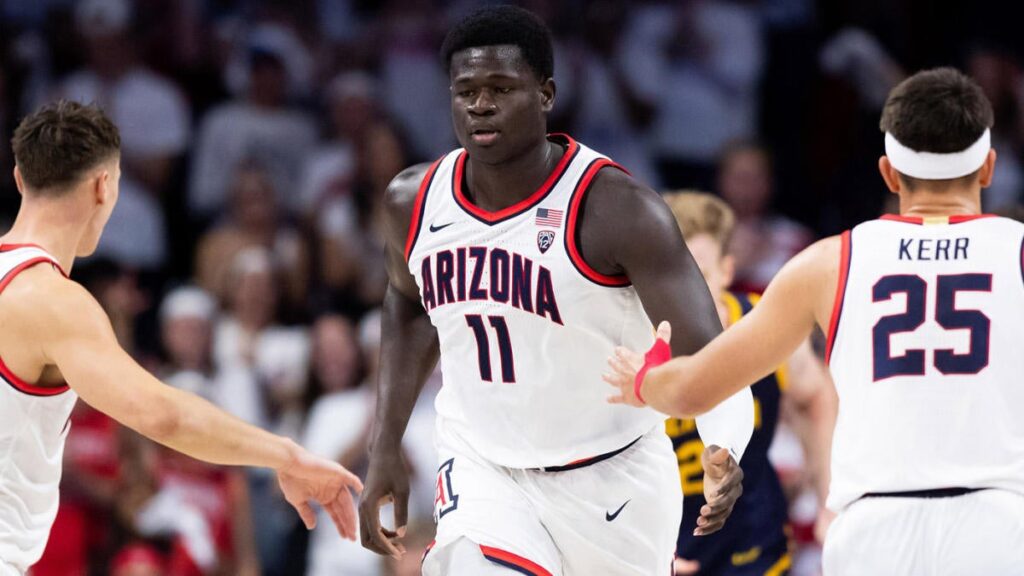 
It might be hard to believe, but the best college basketball Saturday we’ve had so far and likely will have the rest of this season is underway.  That’s right, with five games with both teams ranked in the AP Top 25, we’ll have have December Madness as teams get ready for a break over the holidays.

Put on your best Jesse Katsopolis voice and say those two magical words with me: Haaaave mercy. Because Saturday’s college basketball slate absolutely deserves it.

We have No. 8 Kansas welcoming in No. 14 Indiana to Allen Fieldhouse early in the day. We have No. 2 Virginia welcoming No. 5 Houston smack in the middle of the afternoon. And oh, by the way, the CBS Sports Classic doubleheader between No. 23 Ohio State and North Carolina first followed by No. 13 Kentucky and No. 16 UCLA all inside Madison Square Garden, too. For the night owls there’s also a real late-night treat with No. 6 Tennessee — armed with the No. 1 defense in America — taking on No. 9 Arizona — armed with the No. 1 offense in America — inside the McKale Center.

So, yeah, have mercy indeed.

Our experts have picks and predictions for the day’s biggest games here.

3 p.m. | CBS, CBSSports.com, CBS Sports App (Free) — This is a pretty even matchup on paper but I like the Tar Heels by a smidge. Armando Bacot’s size in the paint and production on the glass is going to give Ohio State fits. The Buckeyes don’t really have someone in the post who can slow him. If UNC does what it should do — which is feed Bacot and attack in the paint — then I think the preseason No. 1 Tar Heels can squeak this out in a close one. Prediction: UNC Pick’ em (Boone)

5:15 p.m. | CBS, CBSSports.com, CBS Sports App (Free)  —  Kentucky star big man Oscar Tshiebwe is going to be a problem for UCLA. Though five-star freshman center Adem Bona has shown tons of promise for the Bruins, Tshiebwe should be salivating over the chance to bully a young player on the block. Assuming UCLA brings some double teams, this game could come down to Kentucky’s ability to knock down perimeter shots. The Wildcats have been solid in that regard so far this season, shooting 39.2% from beyond the arc. Even in an unfamiliar setting in London a couple weeks ago, Kentucky hit 9 of 15 attempts from deep with four different players getting in on the action during a big win over Michigan. Look for the UK offense to remain balanced enough here to get the win. Prediction: Kentucky +1.5 (Cobb)

10:30 p.m. | ESPN2,  fuboTV (Try for free) — This is a tricky one. It pits the No. 1 offense (Arizona) against the No. 1 defense (Tennessee) inside the McKale Center. Which side wins? Vegas seems to like the Vols in this one by a smidge, but I like the Wildcats in this one by a lot, so give me the Wildcats to win and cover. Tennessee’s got weapons everywhere to slow Arizona’s prolific scoring attack but between Oumar Ballo, Azuolas Tubelis, Courtney Ramey, Kerr Krissa and Pelle Larson, there’s just too many scorers to completely trip up. Prediction: Arizona -2.5 (Boone)

12 p.m. | ESPN2,  fuboTV (Try for free) — Indiana hasn’t quite been the same team in its last three games with star freshman Jalen Hood-Schifino on the shelf with an injury. The offense lacks pop and playmaking. Even if he does return it’s reasonable to expect some rust. That’s one reason I like KU minus the points here. Another reason is more obvious: KU is nails at home under Bill Self. It has won 11 straight inside Allen Fieldhouse and is 297-16 (!) at the venue under Self. A win on the money-line is a near auto-bet for KU, but I like laying the points, too. Prediction: Kansas -6 (Boone)

1 p.m. | CBS, CBSSports.com, CBS Sports App (Free) — Alabama beat Gonzaga 91-82  last in Seattle last season. That Crimson Tide team was less-talented and far more erratic than this year’s version. Gonzaga is still trying to figure out its collective identity beyond the stardom of Drew Timme. With this year’s game being played in Birmingham, the Crimson Tide should have the edge in terms of fan support. Though young, this Alabama team proved last week in a road win over Houston that it can handle pressure situations. Prediction: Alabama -1.5 (Cobb)

2 p.m. | ESPN2,  fuboTV (Try for free) — You can overthink matchups like this one trying to factor in venue, home advantage, road performance — but I’m keeping it simple. I’m picking the best team. That’s Houston. So I’ll take the Cougars. They’re going to feast on the offensive glass and I expect Marcus Sasser to find his All-American form after some streaky play of late. Prediction: Houston -2 (Boone)

Who will win and cover in every college basketball game? Visit SportsLine to get picks from the model that simulates each game 10,000 times and is up more than $1,200 for $100 players on its top-rated spread picks the past six years.