On anniversary of NASA’s Webb telescope reaching destination, here are the most striking images so far 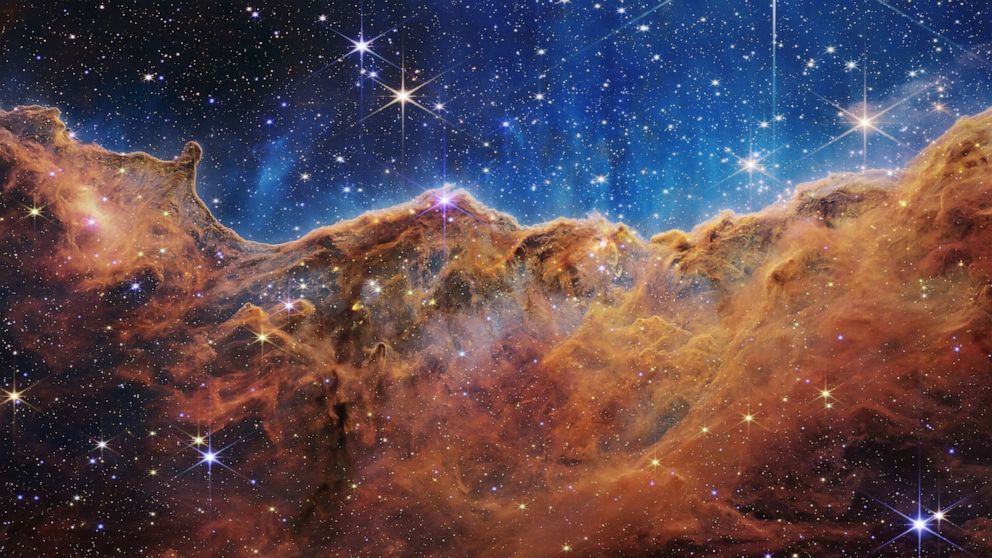 
Tuesday marks one year since the James Webb Space Telescope reached its destination, orbiting 1 million miles away from Earth.

The Webb telescope, which was launched on Christmas Day in 2021, was a collaboration between NASA, the European Space Agency, and the Canadian Space Agency with the goal of studying the formation of the universe’s earliest galaxies, how they compare to today’s galaxies, how our solar system developed and if there is life on other planets.

It uses infrared radiation to detect objects in space and can view celestial bodies that are generally invisible to the naked eye.

Since then, the Webb telescope has sent back plenty of images, including of stars, planets and nebula and even galaxies millions of miles away.

Here are some of the most striking images taken over the course of a year:

The first full-color image taken by the Webb Telescope was unveiled during a press event on July 11 at the White House hosted by President Joe Biden and Vice President Kamala Harris.

The image of the galaxy cluster SMACS 0723 is the “deepest and sharpest infrared image of the distant universe to date,” according to NASA.

Thousands of galaxies can be seen in the image but, according to NASA, it covers the size of the equivalent of someone holding a grain of sand at an arm’s length distance.

It was also the first time the public understood how much more powerful Webb is than its predecessor, the Hubble Telescope, which only sees visible light, ultraviolet radiation and near-infrared radiation.

The image, revealed July 12 during an event held by NASA, showed new details about the Carina Nebula, located in the Milky Way Galaxy.

Just the edge of the nebula can be seen, but the image shows hundreds of stars that were previously masked by a cloud of gas and dust.

The area, referred to as the Cosmic Cliffs, shows a “giant, gaseous cavity” as young stars that were recently born push down ultraviolet radiation and create the jagged-looking edge.

The cloud-like structure of the nebula contains ridges, peaks and valleys — an appearance very similar to a mountain range.

On Aug. 22, NASA revealed two new images of Jupiter taken by Webb, which show the planet’s atmosphere, rings and moons in never-before-seen detail.

The first image is a composite showing swirls of different colors, indicating Jupiter’s turbulent atmosphere, and the infamous Great Red Spot, which can produce winds of more than 250 miles per hour.

The second image shows Jupiter’s rings, which are a million times fainter than the planet — according to NASA — and two of its moons, Adrastea and Amalthea.

First released Aug. 30 by the ESA, Webb captured an image of the Phantom Galaxy, which is located about 32 million light-years away from Earth.

Also known as M74, the Phantom Galaxy has low surface brightness, making it hard to see and requiring clear, dark skies to do so. However, Webb’s sharp lens has captured the clearest image of the galaxy’s features.

“These spiral arms are traced by blue and bursts of pink, which are star-forming regions,” NASA wrote in a social media post. “A speckled cluster of young stars glow blue at the very heart of the galaxy.”

NASA released an image of “The Pillars of Creation” — young, bright-red stars within a billowing cloud of gas and dust — on Oct. 19

The Pillars of Creation are elephant trunks, a type of interstellar matter formation, located in the Eagle Nebula, which is about 6,500 to 7,000 light-years away from Earth, according to the space agency.

Released Nov. 16, the Webb Telescope reveals a protostar, which is the early stages of a star being born.

The cloud of gas in red and orange contorts into the shape of a fiery hourglass.

As it draws material in, its core will compress, get hotter and eventually begin nuclear fusion, creating a star.

The last image released by NASA ahead of the one-year anniversary shows a molecular cloud, which is where stars and planets are born, with icy ingredients.

The telescope shows the frozen form of elements, including carbon, hydrogen, oxygen, nitrogen, and sulfur.

“We’re not talking ice cubes,” NASA wrote in a social media post on Jan. 23. “This molecular cloud is so cold and dark that various molecules have frozen onto grains of dust inside. Webb’s data proves for the first time that molecules more complex than methanol can form in the icy depths of such clouds before stars are born.”

As worldwide need for Covid-19 vaccines dries up, the software dependable for vaccinating the world’s…